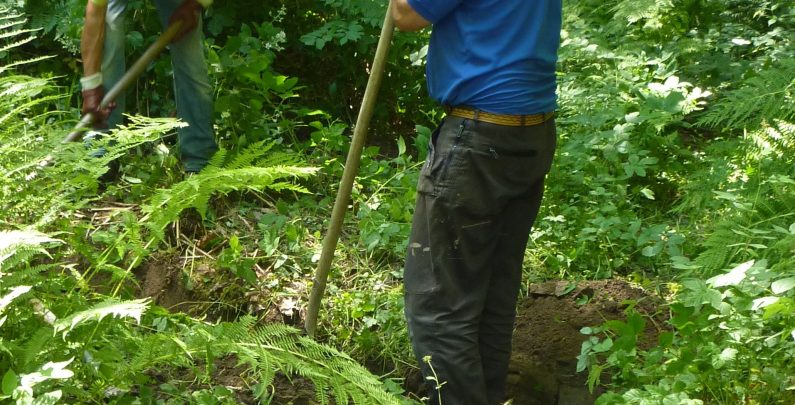 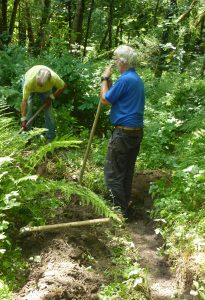 A good turnout in July saw work carried out in various areas: cutting back bramble from footpaths; repair work to the gatepost at the top of Broadwood; culling of ash saplings affected by ash die-back; work on digging channels at the Broadwood side of the bridge to deal with the problem of winter flooding

And there was still time for a refreshment break at the new & almost completed barn! 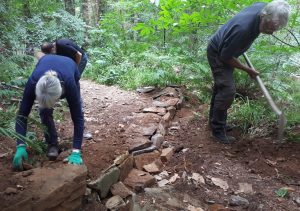 August’s working party concentrated on constructing stone cut-offs across the path from the river up to the top track at Colquite, to reduce the amount of surface water that runs down to the riverside path. 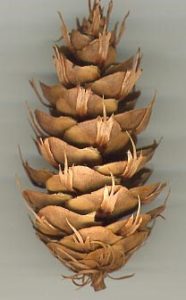 All visitors to Stara love seeing the big conifers alongside the river and at the top of Colquite Wood. These are mainly Douglas Fir planted by the Duchy in the 1930’s and have grown steadily in the damp and sheltered conditions at the bottom of the valley. Douglas Fir is named after David Douglas the intrepid Scottish explorer who walked much of the Rocky Mountain range in the 1820’s searching for trees.

Douglas fir is a fine timber tree and is planted throughout the world wherever suitable conditions prevail. The tree is not actually a true ‘fir’ in the botanical sense and is named Pseudostuga menzeisii after Archibald Menzies who first described the tree in 1791. Douglas takes the credit for recognizing its timber potential and introducing it to Europe.

You can identify it from its cones which have an unusual tooth shaped flap in between the cone scales. Squash some of the needles and they smell of oranges.