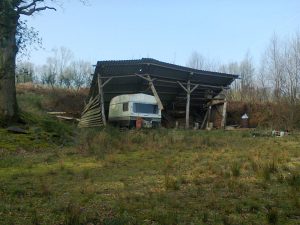 With the loss of the shelter in the gales of 2016 a smaller but more robust shelter is being constructed. 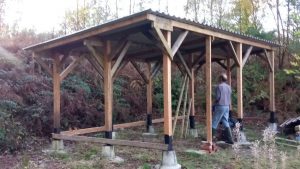 This time, substantial foundations have been constructed and although it has taken considerable time, effort and finance it is hoped that it should stand up to the expected winds. Mounted on conical concrete columns, each with a flat bar extending down into the ground, the nine upright spruce columns support the roof. Extensively braced as shown, the roof spars are used to support the cladding recovered from the old shed. To replace the old tool shed, a secure section is being built into the shed so that tools can be stowed and maintained.